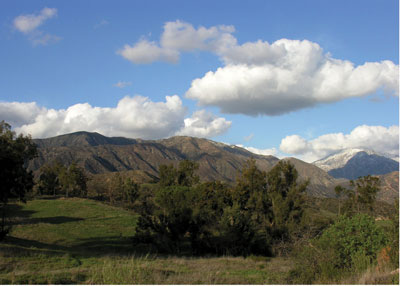 The Claremont Hills Wilderness Park opened in 1996 with 1,440 acres and was dedicated as a City Nature Park in 1997. The 2008 incorporation of Johnson's Pasture increased the park to 1,620 acres. Park boundaries include Marshall Canyon to the West, Angeles National Forest to the North, and San Bernardino County line to the East. Park elevation varies from 1,800 to 3,000 feet.

The earliest known inhabitants of the area were the Serrano (highlander) Indians. A nomadic people, the Serrano Indians belonged to the Shoshonean division of the Uto-Aztecan linguistic family—a group that includes such diverse peoples as the Aztecs of Mexico; the Hopi, Papago and Pima of Arizona; the Ute of Colorado and Utah; as well as the neighboring tribes of the Cahuilla, the Luseno, and the Copeno. The best documented evidence of the Serrano presence is on Indian Hill, a mesa located near what is now the Rancho Santa Ana Botanic Gardens. The Claremont area became part of Mission San Gabriel founded in 1771. The Native Americans who lived here at that time became known as the "Gabrielenos" or "Tongva." They are small bands of hunter-gatherers and some of their placenames may be familiar: for example, Azusa and Cahuenga.

The Claremont Hills Wilderness Park Management Plan was created to provide general guidelines concerning park management for City officials with the goal of preserving the natural characteristics of the park while providing visitors the opportunity for passive and recreational enjoyment of the park.