Due to fire danger and COVID-19 concerns, the Claremont Hills Wilderness Park will be closed Friday, July 3 through Sunday, July 5 and will reopen Monday, July 6. The Thompson Creek Trail will remain open. Masks are required on the trail. 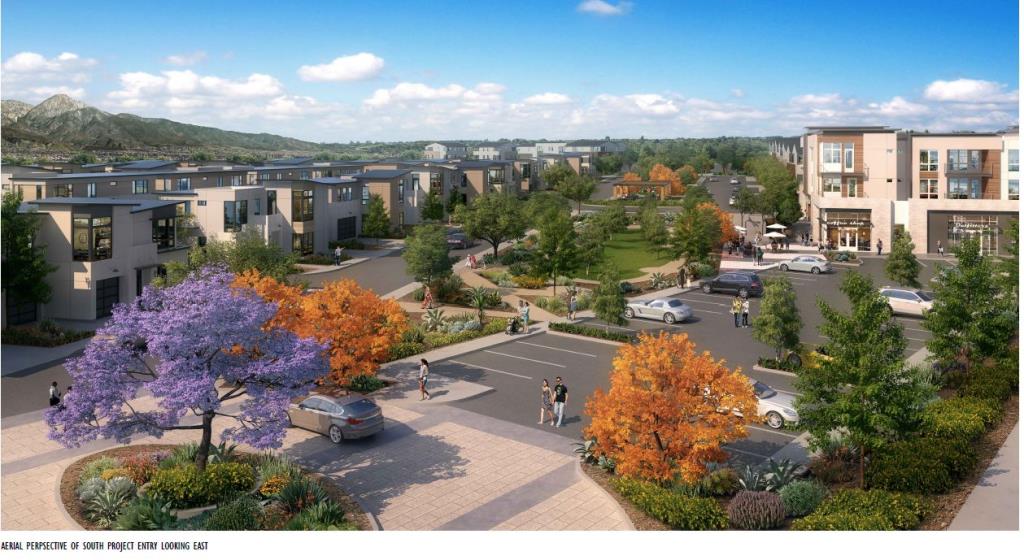 A new mixed-use housing development is proposed on the northwest corner of Monte Vista Avenue and Foothill Boulevard, called "The Commons." The project consists of approximately 6.5 acres in Claremont, and 3.0 acres in Upland, and the applicant is proposing to integrate the areas into one cohesive development with a Specific Plan in Claremont.

The Commons project proposes to convert 6.5 acres of underutilized and vacant land near the entrance to the City of Claremont into a residential/Mixed-Use village. The project plans include a City gateway, park and open space, neighborhood-serving retail, and for-sale residential attached and detached housing. The Commons is designed for a variety of homebuyers, including “empty nester” buyers seeking ease and accessibility in later years, as well as attainable first-time homebuyers. This development would contain approximately 27 single-family detached homes, 68 townhomes (20 of the 68 townhomes are within Claremont), and 5,000 square feet of retail with 15 flats above the retail.

The City of Claremont (City) is the Lead Agency pursuant to the California Environmental Quality Act (CEQA) and has prepared an Environmental Impact Report (EIR) addressing The Commons project which consists of a Specific Plan, development plans, a tentative tract map, and amendments to the City’s General Plan and Zoning Maps. This Notice of Availability (NOA) has been prepared and distributed by the City to solicit written comments from responsible and trustee agencies, from the state agencies, and interested organizations and individuals on the content of the Draft EIR. The City is requesting input regarding the content of the environmental information to be addressed in the Draft EIR.

PROJECT LOCATION: The Commons is proposed on approximately 6.5 acres located near the northwest corner of Foothill Boulevard and Monte Vista Avenue in the City of Claremont in Los Angeles County

PROJECT DESCRIPTION: The Commons would establish land use regulations, development standards, and design guidelines for development within the Specific Plan planning area in the City of Claremont only. The intent is to provide specificity with regard to permitted uses and expectations for the design and construction of new buildings and parking facilities, development and use of open spaces, internal roadway and other circulation improvements, lighting, and landscaping. Future development within The Commons would provide a high quality planned development that provides a diverse mix of housing opportunities with a small area of retail.

The Commons would include a total of 62 dwelling units (27 single-family detached homes, 20 townhomes with 15 flats above the retail spaces) and 5,000 square feet of retail and associated parking. The development will have a 150 foot wide avigation easement, which will be used as active and passive open space for the project. There are three types of plans that will be built on site: single-family detached units, 2, 3, and 4 bedroom townhomes, and single-story flats. The site will be accessed by two driveways on Foothill Boulevard and one on Monte Vista Avenue.

Environmental Effects Evaluated in the Draft EIR: The City prepared an Initial Study for the proposed project and determined the project may have a potentially significant impact on the environment and that preparation of an EIR is the appropriate level of documentation pursuant to CEQA. The maximum development capacity allowed by the Specific Plan has been analyzed in the EIR to provide a conservative estimate of potential environmental impacts of the project. The EIR evaluated the potential of the project to impact the following environmental topics: Air Quality, Biological Resources, Cultural Resources, Energy, Greenhouse Gas Emissions, Hazards, Hydrology & Water Quality, Land Use & Planning, Noise, Transportation, Tribal Cultural Resources, and Wildfires.

The Commons-Notice of Availability Draft EIR

Appendix A1 The Commons Initial Study