The City of Claremont (City) has released the first public draft of the Village South Specific Plan to allow early viewing in advance of an extended public review by City Commissions and the City Council beginning early next year.  Two additional chapters will be added as work on those is completed. The City is in the process of preparing a draft Environmental Impact Report (EIR) to analyze the potential impacts that could result from the approval of the Document.  The Draft EIR is expected to be circulated for public review in February and March 2020.

Summary:  City Staff and its consultant team (Sargent Town Planners) introduced plan concepts and solicited comments from the public and affected groups and agencies in late July and August 2019.  At that time, the City identified a possible range of development that precipitated heavy public comment.  In all, the City received over 150 comment letters and emails that were split fairly evenly between those wanting lower development and fewer residential units and those who were supportive of the concepts as proposed.  Most of the objections assumed a maximum build scenario of development that is not likely to be developed under the plan.  The City has since lowered the amount of development being analyzed in the EIR to represent a more realistic build out for the project.

Project Description: If approved by the City Council, the VSSP will provide a vision, policies, standards, guidelines, and an implementation plan for public and private improvements for transit-oriented, mixed-use development within the Plan Area.  Future development within the VSSP is envisioned as an expansion of Claremont Village, based on the Plan Area’s adjacency to the Claremont Village, the existing Claremont Metrolink Passenger Rail station, and the planned LA Metro Gold Line station. Proposed land uses include ground floor retail and related commercial uses in key locations of the plan area, general office uses, a range of housing types, and a shared parking system that includes two or more new parking structures. The Specific Plan would enable replacement of the existing development on site (with the exception of the buildings deemed to be significant historic resources) with a mix of retail, office, residential uses in buildings similar to those found in the Village Expansion Area and with streets and open spaces similar to those found in both the historic Village and Village Expansion Areas.   A conceptual plan of what is shown below.

For more information or to make comments on the document, please direct your written comments to:

This is the formal start of the EIR process and includes notice of the time period for providing initial comments regarding information that should be considered by the City’s environmental consultant as they review the potential impacts of the project or project alternatives.  The primary purpose of the NOP is to solicit comments by the end of the initial comment period (September 3, 2019). The City’s Environmental Consultant will hold an informational meeting to provide information regarding VSSP and EIR process and to receive comments regarding the scope and content of the environmental analysis. The public meeting was held on Monday, July 29, 2019.

The City is moving forward on the Village South Specific Plan, a community vision for the area south of the railroad tracks along Indian Hill Boulevard. After a series of public input meetings, City staff and Sargent Town Planning drafted a set of Goals and Principles and presented them to City commissions and the City Council. On June 12, 2018, the City Council approved the Goals and Guiding Principles that will be used to prepare the draft Village South Specific Plan. Seven goals were approved that articulate the community’s vision for the area including the shape of the development, mix of housing and retail, diversity of housing, size and massing of the buildings, pedestrian and bike mobility through the area, and continuity of the Village character.

Using the Goals and Principles, Sargent Town Planning is drafting the Specific Plan and will conduct environmental review of the proposed plan this fall. This process is anticipated to take several months.

On Saturday, July 15, 2017, the City held its first public workshop to solicit public input on the Village South Specific Plan.  The event was attended by over 50 citizens and produced many thoughtful comments regarding the project.  The program began with an introduction by City staff and the lead consultant on the project, David Sargent of Sargent Town Planners. It included background on the project, early observations about the project area, and some potential planning and urban design options.  Attendees were then divided into small working groups to develop and prioritize their ideas for the project with results then shared with the entire group.  These suggestions will be summarized at future meetings regarding the project.  Presentation slides from the workshop are attached below. 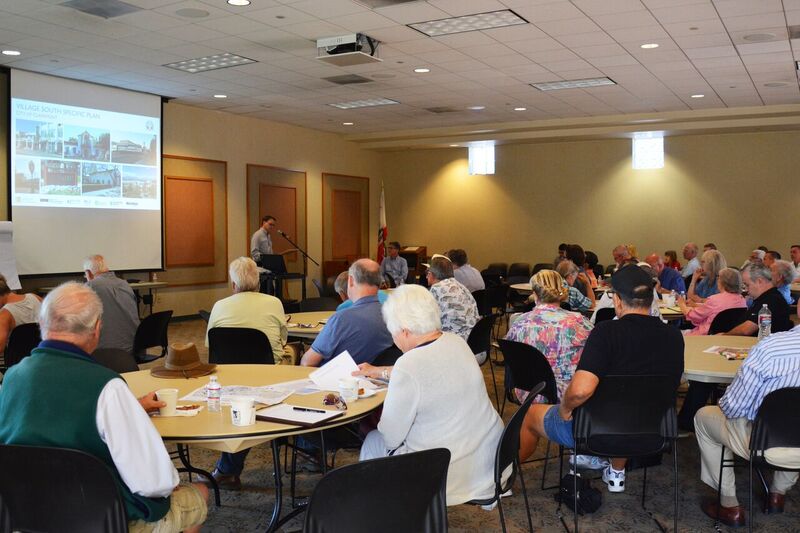 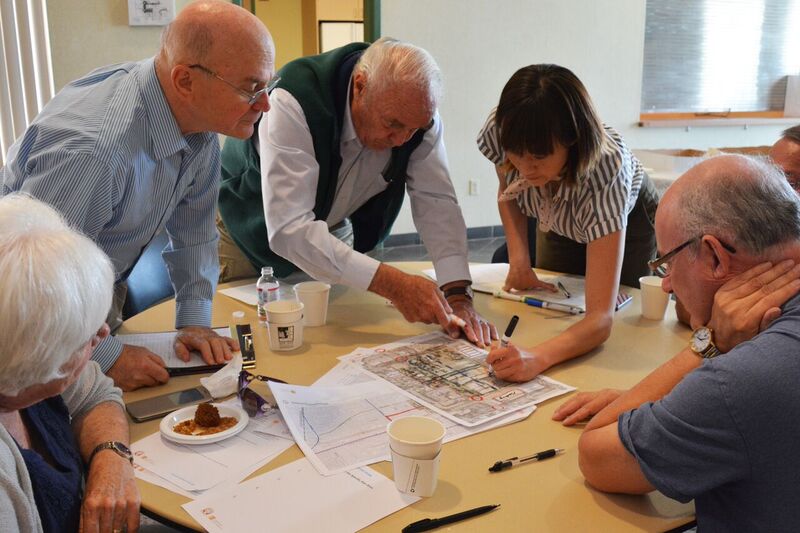